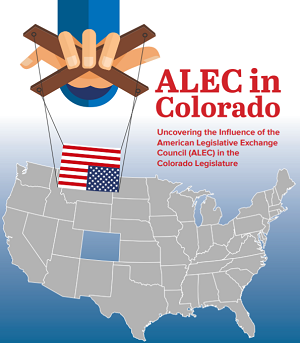 Colorado Common Cause recently released a report on the influence of the American Legislative Exchange Council (ALEC) in the Colorado legislature. Read it here.

The report includes a thorough examination of Colorado legislators with ties to ALEC, based on membership dues and other fees paid to the organization. Researchers also inspected bills introduced into the Colorado General Assembly in 2017, comparing them with ALEC model legislation.

The report highlights ALEC’s corporate members and explores funding the organization has received from the Coors family and Koch brothers. Finally, it reviews how ALEC abuses its public charity status with the IRS, effectively making their corporate donors eligible for tax deductions.